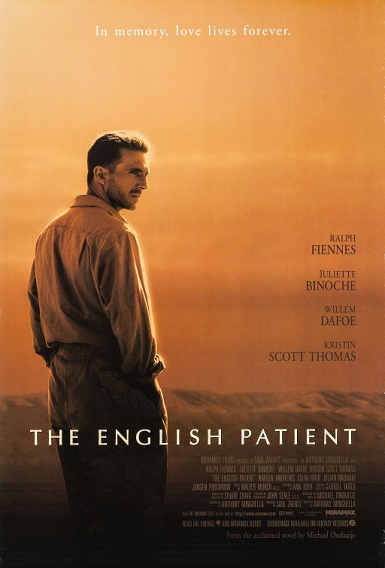 I’m not going to go full Elaine on it and say it sucked, but this was a very weak for a Best Picture winner. The biggest issue (besides it being painfully slow) is that it’s primarily a love story yet there’s zero spark in this brooding romance. I didn’t see a lot of chemistry between Fiennes and Scott Thomas (even if I like her and Binoche’s performance in the movie in general), and it doesn’t help that the movie lacks the focus necessary to really develop it as it has too many subplots for its own good. For a 162 minute movie with a romance at its core, it somehow rushes the attraction between the characters and doesn’t put a lot of depth into the female love interest. It either needed to be a 3 and a half hour uber epic (as if it wasn’t dull enough a lot of the time) or it needed to be a smaller, tighter story focusing mostly on the main romance and the main themes without meandering so much.

I will say thought that the cinematography and locations are clear highlights (this is a beautiful looking and extremely polished film) and the themes (especially those about borders, nationality and morality) work where love stories falter. The movie has enough merits for me to like it over similar films (such as Out of Africa), but it was too prestige movie-style dour and unfocused for me to really be interested in it.

Summary: A man’s inept crime falls apart due to his & his henchmen’s bungling and the persistent police work of a pregnant police officer

If there’s one thing the Coen brothers are exceptional at, it’s building memorable characters and a living, breathing world for them to inhabit; rarely is this better exemplified than in Fargo. Most famously, you have two remarkably complex characters in a movie with a 98-minute run time: Marge Gunderson, who’s the kind of person we would all like to know-kind, polite, supportive, intelligent and humble-and makes a huge impression despite not actually being on screen that much, and Jerry Lundegaard who’s an incompetent and unassuming scumbag who wants to be more than he is but doesn’t even deserve what he has. While these characters are outstanding, they are also elevated by terrific performances from McDormand and Macy, along with a great cast in general. McDormand winning the Oscar is a bit surprising because of her screentime and also because accent aside, it’s not that showy a part, at least in comparison to something like Brenda Blethyn’s performance in Secrets & Lies (who was probably the co-favorite going into the ceremony). The other thing I love is the melancholy score throughout that fits perfectly with the cold, snowy backdrop of the film.

So after all that, why do I not feel it’s an outright great film? It’s hard for me to say other than I didn’t fall in love with it. Maybe it’s because the black humor, a significant part of the movie, was solid but never really produced any laughs out of me. For whatever reason, in spite of its merits, it didn’t produce the kind of reaction out of me, mentally or emotionally, that’s part of a “great movie” experience for me. While it’s not one of my top Coen brothers films, it’s still a really good pitch-black comedy with strong characters and performances.

Summary: A sports agent strikes out on his own after he loses his job

A very middling Best Picture nominee, although perfectly enjoyable I guess. The film’s theme is “can you have a soul and success in a cutthroat, ruthless, totally money-driven industry?”; since this movie plays out as predictably as possible, the answer is of course yes. Cruise is fine and I liked Zellweger a lot, but it’s pretty shocking to me that Gooding Jr. won the Oscar for a performance that didn’t really stand out to me as exceptional-especially in comparison to William H. Macy for Fargo, Armin Mueller-Stahl for Shine or Edward Norton for Primal Fear. Nothing is really problematic here, except that Maguire getting fired didn’t have a good enough build-up: he was fired because of his mission statement I guess, but it feels absurd for the company to fire their top agent at the drop of a hat simply because he was critical of the industry in a memo. Unless it was actually because Mohr’s character basically staged a coup? Anyway, it stuck out to me that the plot point that gets the whole plot rolling is executed poorly. It was fine, but still an uninspired choice.

Summary: A successful black woman discovers that her birth mother is a lower-class white woman. As emotions run high, everyone’s secrets are exposed.

In terms of style, story and especially score, this feels like an elevated film student movie, but it goes beyond those trappings and is quite good. There’s almost no editing or camera movement in the entire film, presumably because the director wanted it to feel like the audience is a fly on the wall looking at this family drama that is really happening in front of them, and those things would only serve to break that illusion. Also to this end, most of the movie was unscripted, and the actors  only knew what their characters knew-the actors reactions to revelations are genuine. The result is a movie that look and feels like no previous Best Picture nominee, for both good and bad. The performances are very good on the whole-Blethyn is excellent as the fragile and frustrated birth mother of Jean-Baptiste’s character, Spall does a good job as the pillar of a complicated family who is dealing with baggage of his own, and Jean-Baptiste herself does a good job as the outsider to the family who eventually has to deal with herself no longer being an outsider. The two big centerpiece scenes (the first conversation between Blethyn and Jean-Baptiste and the big climax) are also executed beautifully. There’s only two things I would criticize: 1) it has the most generic “artsy movie sad violin and mandolin” score I’ve ever seen, like something out of a pretentious student film and 2) it feels slightly bloated and I don’t know if we need as many of the scenes with Spall as we get. Overall, good movie with good performances and the stylistic choices are effective.

Summary: A pianist fights to overcome schizophrenia and return to the concert stage

Geoffrey Rush is another example in what was definitely a trend back then: he was the 6th person in a period of 9 years to win Best actor for portraying a person with a handicap or illness: Dustin Hoffman for Rain Man (Autism Spectrum Disorder), Daniel Day-Lewis for My Left Foot (Cerebral Palsy), Al Pacino for Scent of a Woman (blind), Tom Hanks for Philadelphia (AIDS) and for Forrest Gump (developmental disability), and Geoffrey Rush for Shine (schizophrenia). I’ve seen five of those, and of them I think Rush was the least deserving, even more than Pacino who was basically a lifetime achievement winner. There’s nothing wrong with his performance, but something about it felt like he was trying too hard (a la Sean Penn in I Am Sam or Cliff Robertson in Charly), something I confirmed after watching interviews with the actual subject of the film. That, and he also appears very sparingly until the last 40 minutes-Taylor had as much if not more screentime as the younger version of the same character.

I actually thought Mueller-Stahl gave the best performance here (as Rush/Taylor’s domineering father), and the relationship between him and his son was the backbone of the movie-it’s the main reason why I thought the first half of the movie before Rush really comes in was much stronger than the second (that, and the big piano competition scene is a great combination of cinematography, sound mixing and editing). There’s controversy whether the film’s depiction of their relationship was accurate with different family members saying different things, but since it’s a matter of legitimate debate, I can’t knock the film for it. I liked the movie, but Rush’s performance wasn’t as good as I was expecting. 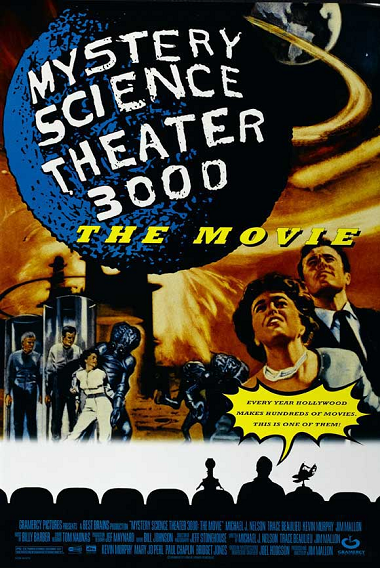 1996 wasn’t an especially good year for movies, so I’ll highlight a personal favorite-a movie that’s shorter than the episodes of the TV series it’s based on: Mystery Science Theater 3000: The Movie.

Mystery Science Theater 3000 (MST3K) was a show where the three main characters were on a space station and for reasons that don’t need to be explained here, were forced to watch bad movies. It was a very significant TV show for a number of reasons: first, it was the signature show during the early years of Comedy Central (originally The Comedy Channel) and helped make them the major cable channel they are today. Second, and most important though is that it was the progenitor for untold numbers of “riffers”, people who have made careers online through making fun of bad movies and also spread the idea of watching bad movies for their entertainment value to a mass audience. It lasted for 10 seasons on cable from 1989-1999 (along with it’s local TV season in Minnesota from 1988-89), with the last 3 on Sci-Fi Channel plus the movie they made where they riffed on the 1950s Sci-Fi classic This Island Earth. Unfortunately, it had horrible distribution (only playing in 26 theaters) and was just a bad idea in general: why make a film based on a TV show that’s identical in essentially every way to a typical episode of the show? The movie is a pretty average episode all told, not standing up to the all-time classics like Space Mutiny, Manos: The Hands of Fate, I Accuse My Parents and Pod People. Hopefully they can capture the same magic with its revival on Netflix in April 2017.

An often-boring, self-important yet undeniably handsome epic winning Best Picture? I thought I was done with the 80s, but The English Patient fits right in with movies like Out of Africa and Gandhi. Even if I didn’t think any of the movies this year were truly great, there were much better options available to voters like the rich world and characters in Fargo or the bold, low budget Secrets & Lies.

For 1997: The most recent film to win both Best Actor and Actress; the low-budget comedy that beat out Titanic for the BAFTA; Ben Affleck and Matt Damon planted a random gay sex scene on page 60 of the script when they sent it to studios to see which ones would actually read through it-only Miramax did; The first film noir to be nominated since Chinatown (and also takes place in L.A.); and after finding out she would need to be naked in front of Leonardo DiCaprio for the movie, Kate Winslet decided she needed to break the ice with him-so when they met for the first time, she flashed him.